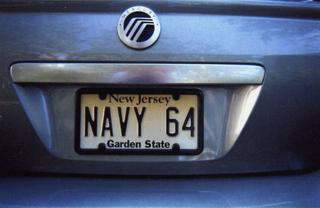 The author is an avid Navy football fan, as his license plate indicates.

That's a morbid way to welcome readers to a website. When you reach a certain age, though, you think about stuff like that: erecting monuments to yourself, figuratively and literally. (Don't get me started on the rampant overuse and misuse of literally, but the word fits here.) I've a bit more space on my website than I'll have on that block of granite; still, there are life markers that define me and that belong in both places.

Naval aviator is one. It was the hardest thing I accomplished, even harder than writing a book. It took two years to get my gold wings, a process that included 16 carrier landings as part of my training. I went on to fly land-based, multi-engine aircraft—the P-2 Neptune and the P-3 Orion, specifically—and never had a shot or missile fired at me in anger. Still, commanding a 12-man crew in search of Soviet submarines and jockeying an airliner-sized plane into tight turns, 300 feet above the ocean, wasn't anything to sneeze at. The P-3 was actually a military version of the Lockheed Electra, widely used in commercial aviation before the jet age.

Trial prosecutor was the job I was best at and the job I loved best, for 19 years, with more than 2,000 trials and a 99 percent conviction rate. Most were bench trials—i.e., in front of a judge, only—for lesser offenses, like drunk driving, other traffic offenses, and misdemeanors. But I had close to 50 jury trials, involving murder, kidnapping, arson, and other serious crimes. The duty of a prosecutor, they say, is to see justice done and not, simply, to get convictions. Well, that's true, but I never prosecuted anyone I didn't believe to be guilty, beyond any reasonable doubt. And so, to me, getting a conviction was seeing that justice was done.

My biggest case? The murder of an heir to the Sealy Mattress fortune and the kidnapping and robbery of his elderly mother. It was a meticulously planned crime encompassing three separate home invasions and four other victims. Both defendants were convicted of all 18 counts in the indictment. The Sealy Mattress case was to me what the "Penge Bungalow murders" were to Rumpole of the Bailey, John Mortimer's magnificent character of an English barrister. Rumpole appeared for the defense, of course, while I appeared for the "Crown."

The thing that fills me with most pride, though, is my four-year stint as mayor of Ramsey, New Jersey, my hometown and the place where my family has been for more than 100 years. It wasn't a job, it was a privilege. My first book chronicled that experience and remains a resource for anyone contemplating a run for local office. Titled Passion, Politics and Patriotism in Small-Town America: Confessions of a plain-talking, independent Mayor, it's still available at amazon.com and is featured in the "Books" section of this website.

My opinion pieces and books reflect the peripatetic life I've led—ideal training for a writer, if the old saw, "Write about what you know," holds true.

I hope you'll visit this site once in a while to check my latest blog posting or to see what's new in my publishing and political worlds. Click on "Contact" if you wish to write to me about any of my books or opinion pieces or upcoming events or anything else. You can expect a timely, personal reply. Click on any of my book titles and you'll see excerpts as well as ordering information, should you be so inclined.

Richard Muti has more than 100 publishing credits, mostly having to do with public policy, law, politics and government. He spent 19 years as a successful trial prosecutor and has also taught writing, American government and politics, criminal justice, and history at three New Jersey universities. He is a graduate of the U.S. Naval Academy, Harvard Business School, and Rutgers Law School, as well as a former Navy pilot and former mayor of Ramsey, New Jersey, his hometown. Muti also served for six years on the Ramsey Board of Education as a trustee for the public school system in which he, his father, and dozens of other family members were educated.

That 10-year span of service to Ramsey, as a full-time mayor and as a school trustee, consumed more than 10,000 hours of Muti's time, but it was a labor of love, according to the former mayor.

"I owe everything I achieved in life to my upbringing in Ramsey, to my nurturing family and to my public school teachers, every-one of whom I remember and revere to this day," Muti said.

Richard Muti lives with wife Lorraine and their golden retriever, Miss Moneypenny, in a 100-year-old Victorian, just blocks from his boyhood home in Ramsey.