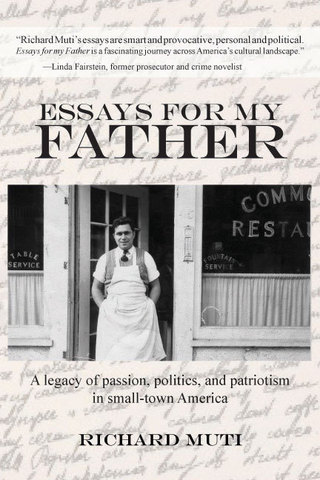 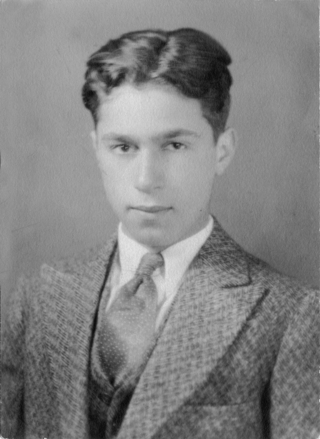 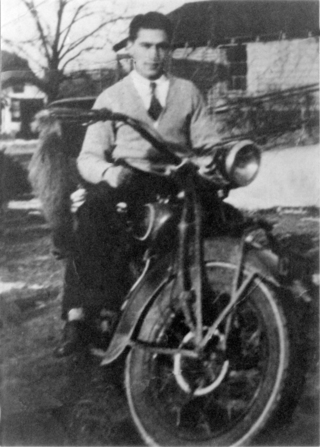 A youthful and adventurous Mauro Richard Muti, in the mid-1930s. 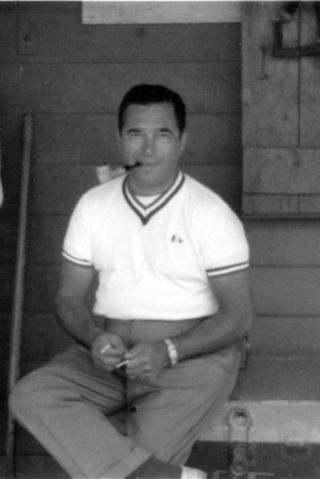 Essays for my Father: A legacy of passion, politics, and patriotism in small-town America

Author Richard Muti has published this collection in honor of the 100th anniversary of his father's birth. Mauro Richard Muti had a profound influence on the author's lifetime of public service, as a Navy pilot, prosecutor, community volunteer, mayor, and school board trustee.

Here are excerpts from the pages of Essays for my Father:

“In many ways, Sarah Palin’s career is an amazing political story.
Her catapult to the governorship of Alaska, after brief stints as a
PTA president, municipal council member and mayor of Wasilla
(pop. 7,028), was Frank Capraesque. But her placement on a
national ticket as the Republican vice presidential nominee is
Franz Kafkaesque.”

“These terrible gun massacres have brought us to an emotional
cliff, more perilous than any fiscal precipice. In what has be-
come a national nightmare, we relive the horror with ‘Ground-
hog Day’-like repetitiveness and are left wondering if Newtown
will be just one more in a growing list of killings by deranged
young men armed with military-style assault weapons. Or, will
the specter of 20 dead 6- and 7-year-olds, each riddled with as
many as 11 bullet holes, finally overcome the powerful gun
lobby’s opposition to even the mildest of reforms.”

“Operation Enduring Freedom? It is an insult to our intelligence
when leaders glorify a war by affixing to it a name with such
transparent intention. We’re engaged in a 10-year war to prop
up a corrupt government, a war in which Afghans we trained
and equipped turn on and murder Americans. Enduring freedom,
indeed. In Afghanistan, a land that has swallowed the armies of
Alexander, Genghis Khan, Russian Tsars, the British Empire,
and the Soviet Union. And, after remnants of each army leave,
a land that reverts, unerringly, to its barbarous, tribal ways, its
stoning of women, its repression of not only free speech, but
freedom of thought, of ideas, of spirit. Just once, I’d like us to
elect a president who has read a history book.”

“What are we to make of our Jekyll and Hyde governor of New
Jersey? Is the hard edge he often displays an essential compon-
ent of leadership? In ‘Lincoln,’ the new Spielberg movie, we
see the man revered as our greatest president acting, at times,
like an overbearing, cajoling, wheeling and dealing, archetypal
politician, willing to do almost anything to achieve his public
policy objective. I’m not comparing Chris Christie to Lincoln,
but what I am saying is that success 'in the arena,' as Teddy
Roosevelt noted in his famous speech at the Sorbonne, some-
times requires our political leaders to be ‘marred by dust and
sweat and blood.’ Roosevelt didn’t say whose blood.”

“Saddam Hussein was a bloody bastard, and we’re often re-
minded that he killed thousands of his own people. Well, we
relieved the Iraqis of that scourge, but more than 100,000
civilians are dead in the process. Are they better off as a
result, or would they have been better left alone? Hussein
was also a counterfoil to Iran. Yes, we took out his mythical
nuclear capability, but we are now faced with a potentially
real nuclear capability in Iran, unchecked by a hostile
neighbor.”

“The extreme right wing of the Republican Party is a bastion of
Constitution worshippers, but my beef with those tri-corner-
hatted, flag-waving, scripture-quoting patriots is their selective
embrace of our Constitution, their hypocritical, almost slavish
adherence to some of its principles while ignoring others.”

“I can’t remember the last time I heard a speech that didn’t
end in, ‘God bless you and God bless the United States of
America.’ Frankly, I’m dismayed by the way religion now
permeates our political discourse. If I could time-transport
the 55 Framers from their Constitutional Convention in
Philadelphia in 1787 to today’s political arena, I think they’d
share my consternation over what we’ve become, with regard
not only to religious influence on politics and government
but also to the complete disdain for the art of compromise.”

“The fahgeddaboudits and howyadoons spewed forth like stac-
cato bursts from a tommy gun in HBO’s mob hit, ‘The Sopranos.’
Tony Soprano and his crew put New Jersey on the map, but in
a way that perpetuated an unfortunate stereotype. There is a
different kind of Italian-American family saga that needs to be
told, the one I experienced growing up in New Jersey in the
1940s and ‘50s. It was less exciting—everybody worked, nobody
got whacked—but more representative of the 17 million Ameri-
cans who proudly proclaim their Italian ancestry.”

“What a mess those ‘nattering nabobs’ of neo-conservatism got
us into. Just picture where we were as a nation at the end of
Clinton’s second term. We had a balanced budget, no wars,
and a bright financial future, with the potential payoff of our
national debt within a relatively short time frame. I’m not a
big Clinton fan—my kids got me his autobiography as a gift
six or seven years ago, and I haven’t even opened it. But you
have to give the man his due.”

“The New Jersey Education Association and Gov. Chris Christie
are going to the mattresses. So far, both sides have displayed all
the finesse and restraint one might expect from a clash between
headstrong Sonny Corleone and the Five Families.”

“I’ve been a frequent critic of the New Jersey governor, but the
guy is beginning to grow on me. I’ll admit that it took a while
to get past his abrasive manner. When they doled out attitude to
us Jersey natives, Chris Christie was first in line.”

“As a boy in the 1940s, I remember reading an article in the New
York Daily News about the last surviving Civil War veterans and
lamenting the fact that Confederates outnumbered Union sol-
diers. There were five or six of the Rebels left and only one or
two of the ‘good guys.’ In 20 years, give or take, we’ll be hon-
oring the last of the World War II vets—all of them good guys.”

“In a government-sponsored, taxpayer-funded program, live
syphilis and gonorrhea bacteria were transported in the late
1940s from a Staten Island, New York lab to Guatemala,
where they were used to intentionally infect prisoners, pros-
titutes, and soldiers. The purpose? To see if penicillin would
be an effective cure for those venereal diseases. In other words,
the United States was using human subjects for medical exper-
imentation without their consent or knowledge, and we were
doing so at about the time we were prosecuting Nazis at
Nuremberg for crimes against humanity.”

“What is it with Palmetto State politicians? Is there something in
the air in South Carolina? Noxious fireworks fumes that accum-
ulate in toxic quantities and waft their way to Columbia, the state
capital? Has Pedro broken loose from 'South of the Border' and
become a political consultant?”

“It’s the same old story. Politicians taking the easy way out so
they can continue their posturing, their sloganeering, and their
15-second sound bites, with as much bluster and self-assured-
ness as they can muster. Just once I’d like one of them to exhibit
thoughtful consideration and substance on any important issue,
rather than the outright certainty and pat answers they have for
everything.”