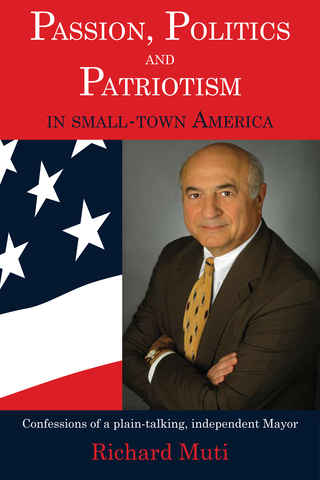 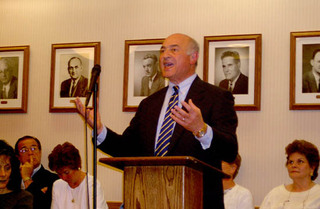 Mayor Muti emphasizes a point at a public meeting filled with Ramsey citizens. Portraits of former mayors line the wall behind him. 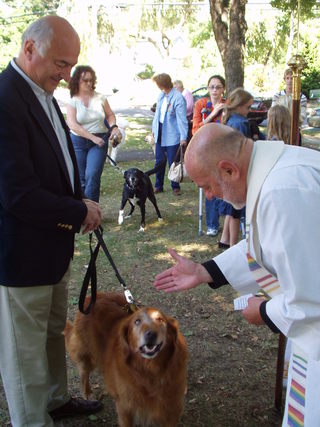 Mayor Muti and Chelsea, First Dog of Ramsey, as she receives the tra-ditional Blessing of the Animals at St. John's Episcopal Church.

Passion, Politics and Patriotism in Small-Town America: Confessions of a plain-talking, independent Mayor

On November 5, 2002, the people of Ramsey (pop.14,500) in Bergen County, New Jersey, elected Richard Muti, a 62-year old political novice, as their mayor. Muti was an Annapolis graduate and a former Navy pilot. He had an M.B.A. from Harvard Business School and a law degree from Rutgers. He had been a prosecutor for 19 years. He was a published writer and had taught English, history, American government and politics, and criminal justice at three universities. If ever there was a man ready to lead his community, Muti was he.

Ramsey was no different from thousands of municipalities across America. Escalating costs, like health insurance benefits for employees, were squeezing an already overtaxed citizenry. Muti took office with a bold reform agenda, but also with an entrenched council majority of political opponents stacked against him.

This book is the story of an idealistic newcomer's four years at the helm of "Small-Town, America"—his highs and his lows, his successes and his failures. It will cheer you with the realization that, yes, there are leaders willing to tackle truly difficult issues with courage and determination. But it will also be a sad reminder that such men and women are few and far between, not surprising when one considers the obstacles often thrown in their path.

Muti attacked problems head-on, often dragging governing-body colleagues, kicking and screaming, across the finish line. But such boldness was not without cost.

In the book's final chapter, "The Mayor's Report Card," Muti gives a frank assessment of his time as mayor, including a number of "do-overs" he wishes he had. In the end, we picture a modern-day Don Quixote, with his fair share of human frailties, tilting not at windmills, but at real-life misfeasance, nonfeasance and other villainy in the public sector. Muti leaves office after one term—face marred by the dust, sweat and tears of battle, much like Roosevelt's "Man in the Arena," but with spirit unbowed.

Here is what two prominent observers of the American political scene said about this book and its author.

"It is a rare person indeed who combines academic credentials with public service and both of those with lucid, reflective writing. Muti excels as teacher, and teaches as an elected leader."

"Mayor Muti asked the tough questions and challenged the status quo. Whether you agree or disagree with his style, no one can doubt his sincerity as a public servant—one who was more concerned about future generations than his own political career. That’s called statesmanship."
—Murray Sabrin, Ph.D., professor of finance, Anisfield School of Business, Ramapo College of New Jersey.